My friend Ali Sikelo moved back to Malawi in 1997 after the country held free elections for the first time since 1964. I worked with Ali at the former Metro Toronto Archives, now the City of Toronto Archives from 1991-1997. He was a quiet man with a loud laugh. He loved good conversations, the Leafs, and dancing but above all, he loved Malawi. He died July 13, 2011 in the country of his birth.

This is the obituary I wrote for the Toronto Star that appeared on Jan. 1, 2012. Read his incredible story that appeared in the newspaper on Dec. 28, 2009. Watch his inspiring video, The Road home. 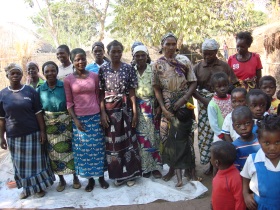 Two years ago, the Star published the inspiring story of Ali Sikelo, a former refugee from Malawi who sought a safe haven in Canada, but then returned to the country he fled 33 years previously.

Malawi lost a man dedicated to its democracy, and in return, it seemed to relinquish democracy altogether. On July 20, a week after Sikelo’s death, government forces killed 20 anti-government protesters and wounded dozens more. The protesters were demanding the resignation of President Bingu wa Mutharika who they accuse of a crackdown on human rights, and corruption that ruined the Malawian economy.

Ali Sikelo, former child rebel soldier, told The Star that democracy was so entrenched in Malawi, that one-party rule would never return to his homeland.

Interviewed by The Star at his home in Malawi, Sikelo was upbeat that his country had changed for the better. A defeated former MP, he was proud that a change of government occurred without violence. “The struggle to free Malawi was worth it because if we didn’t do anything it would be the same.” He boasted, “The fruits of our struggle are here: now we are fully democratic. A democracy without tolerance cannot survive. It will perish.”

President Mutharika, far from calming activists’ fears of a return to dictatorship like the country knew under Kamuzu Banda for 30 years, yelled, “If my opponents want war, so be it. I will take them head on. Let the country go on fire.” Countries that provided aid to Malawi are withholding funds because of humanitarian concerns.

How did a country that went from bad to good, turn bad again so quickly?

With the events occurring right after his death, it seems like Sikelo underestimated Mutharika’s ambition. He did not foresee Britain indefinitely suspending aid to his poor country due to fears of corruption and mismanagement of donor funds or that President Mutharika would squander the goodwill towards Malawi by a crackdown on human rights and now censorship of the Internet.

Makhumbira Munthali, a friend to Sikelo and fellow ex-pat, returned from visiting Malawi in December. He describes a country where the president is “becoming dictatorial and the country’s economy is in shambles. Availability of commodities is very erratic especially diesel, petrol, paraffin, soft drinks and the prices of commodities have shot through the roof. Car owners sleep at petrol stations in order to have a chance to fill their car. Life is very unbearable for the common person in Malawi now.”

Sikelo sacrificed his future in Toronto – a permanent job, a government pension, and free health care – to return to his past with a dream to restore the family and the country he left behind.

Even though he was gaunt, sick with malaria and lived a sparse lifestyle, certainly by Canadian standards, he nonetheless took joy in showing the improvements in his village when The Star visited him at his home in Malindi, in southern Malawi.

Known for his extremely positive outlook in Toronto where he worked at the Metro Archives (now the City of Toronto Archives), he glossed over the crime and cockroaches plaguing his corner of Toronto at King and Jameson, where he had a one-bedroom apartment. “He’d tell us these stories of his harrowing escape to freedom and the hardships he endured,” recounts former colleague Lawrence Lee. He marvelled at his colleague’s fortitude. “Through it all he remained a cheerful, thoughtful person.”

Nancy Hurn, his former supervisor at the City Archives, described his as a “diligent and valued employee of the Metro Toronto Archives. He opened our hearts and minds to the children of Malawi.  His life story is an inspiration and his contibution needs to be remembered.”

Sikelo loved Toronto. During The Star’s visit to his home, he said, “I very much liked living in Toronto. There were no strangers in Toronto. Once you arrive, it’s your home. Every person said ‘Welcome’ to me.”

But he took the unusual step of returning to Malawi after former dictator Banda lost the first free elections, explaining, “The pains my family suffered [were] because of me. I was so mad that all of these people suffered because of me. I returned because I felt I have to come back home to the people who had suffered for me and I had to suffer with them. If there is going to be hunger, we will be hungry together.”

His legacy will hopefully endure in Malindi. As an MP he had the road running through the constituency paved all the way to the Mozambique border. The Chindamba Primary School went from two to eight grades. He brought fresh, potable water to far-flung villages by having 56 wells dug far from Lake Malawi.

The most vulnerable of his legacy, however, are the hundreds of orphans he helped to care for after his stint in parliament.

Sikelo became a foster-father to over 150 children left orphans when their parents died of AIDS or other tragedies. Sikelo set up the Chindamba Nursery School project which provided home-based care and local education to the orphans. No longer did the most vulnerable have to leave their neighbours, friends, relatives and villages to live in a faraway orphanage. Many have graduated from the local primary school, and Sikelo helped those he could, attend high school which charges tuition.

He made sure that the pre-schoolers were fed once a day and often paid for the grain himself. The food that the Mutharika government was supposed to provide for the home-based orphanages, had not been delivered in over two years.

These orphans are now without their champion. If life is hard for the common person, how will orphans fare? Munthali visited Sikelo’s village of Malindi. His plans to build permanent school buildings are on hold. The bricks to be used for this purpose that Sikelo stockpiled are at his house, unused. The school fees for three orphans attending secondary schools are unpaid, as is the monthly allowance to the five nursery school teachers. Sikelo paid for all of it out of his own funds.

Sikelo summed up his reasons for returning to Malawi. “If I wanted to be rich, or to eat better, I would have remained in Canada. But I came here to be part and parcel of the people.”

Sick and suffering in the months leading to his death, Sikelo finally visited the hospital, but left after a week to die at home. The family he abandoned when fleeing Malawi in 1964 comforted him and then buried him in the family plot the day of his death.

Peggy Mackenzie worked with Ali Sikelo at the former Metro Toronto Archives. She travelled to Malawi to interview him in 2009.